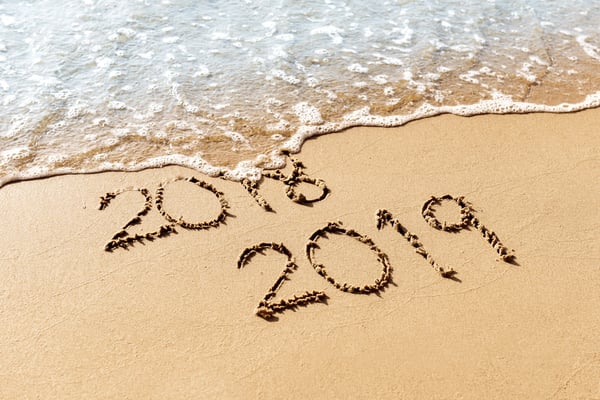 A hat tip to Databox’s head of marketing John Bonini for this post.

I’ll admit it. Just as I was planning to write one of those empty prediction posts calling out what “serious” growth executives would be focused on by the end of 2019, I saw a tweet from John. Its message? “Instead of telling us what’s going to work a year from now, tell us what worked in the last year--we can really learn from that.”

This exercise ended up being both harder and more insightful than I thought it would be. I initially thought I’d sit down and write a post sharing the grand strategies that we implemented, highlighting which ones worked.

However, when I did my “what worked/what didn’t work” analysis, I discovered that what worked didn’t have much to do with any grand strategy. When I look at what really worked in 2018, it was all--with the possible exception of one item--about moving more to the basics and reinforcing things we already knew.

One note: I kept this blog focused on what worked and what didn’t as it relates to our growth efforts, rather than from the perspective of what we’re doing with our clients (though there is certainly some overlap).

This is the one thing that worked that could be considered a “grand strategy.” I shared the details about this in a post on LinkedIn in April.

For years I’ve fought and rejected the notion that many of the bad behaviors attributed to salespeople are caused because they’re paid to close business. I’ve always attributed the cause of these problems to a combination of bad/ineffective management and the key metrics used to monitor/score a rep’s performance.

So this year, in a bout of frustration, I decided to put my theory to the test. I created an event that I called a “Meaningful Conversation,” and gave the event a specific, measurable & verifiable definition. I then told my sales team (and myself) that I didn’t care about closed business and I told my SDRs that I didn’t care about appointments set or SQLs. I replaced those metrics with Meaningful Conversations (MC) and I began assigning MC Quotas.

Now, approximately one year into this experiment, I’m even more convinced my theory about sales rep behavior is correct. By changing the focus of the metrics we use (and I should note that I did not change compensation), behavior immediately changed and today, we enter 2019 with the strongest base for growth we’ve ever had.

I’m a huge fan of data and metrics. But I’ve learned that because they are so powerful, you must be careful with how you use them. As my previous success indicates, what you measure will drive behavior more than virtually any other input.

Meaningful Conversations are a great example of what I refer to as an outcome. To understand what outcomes are, you must first be clear on two other common metrics types:

The problem with measuring activities is that they don’t have a causal relationship with the desired results; the problem with measuring results is that they only measure the past (what happened) and you typically have very little control over the result. For example, a pitcher can throw a pitch, but they cannot control whether the batter hits it.

Outcomes lay between activities and results. They're directly influenceable and have a causal relationship to the result you desire. Outcomes combine the qualitative and quantitative. As a result, they’re harder to measure and are often hard to identify.

The net result of a focus on outcomes is that you reduce the number of key metrics you monitor--which is good--and you naturally make better, faster decisions and improve performance.

I talk to people all of the time who tell me that they’d do more video, but they don’t have the equipment to “do it right.” Well, I can conclusively tell you that you can gain big benefits from video without doing any of the new, cool and/or high-production tactics that dominate the video landscape.

We began to seriously embrace video in 2017 and went all-in in 2018. However, most of our videos are either a person (usually me) sitting in front of a desktop camera, with some decent lighting and a green screen. The total investment in video equipment is less than $300, and the impact has been tremendous. You can read more about some of what we’ve done from Vidyard’s post announcing that we won the 2018 Video in Business Awards for Sales Engagement.

Better Use of Less Tech

I love tech and enjoy jumping into a new application before most people even know it exists. This is one of the reasons that Imagine embraced the tech stack before most other agencies were even talking about it.

At one point we had more than 20 apps that were a part of our “growth” stack. While that was fun for me, it wasn’t doing much for the business and, candidly, it was driving my team crazy.

What’s interesting is that as we began to advise clients more and more on how to effectively utilize technology, I realized we were doing a number of things that we advised clients not to do. So, we began following our own advice and the net result is that we’re using fewer apps, and using all of them better. This also applies to the capabilities within an app.

Don’t get me wrong, I still get frustrated and sometimes even envious of what we are “missing out on” by not using tech more. But, I’ve realized that if there’s not a strong need and commitment, technology is more likely to confuse things rather than accelerate them.

Doubled Down on System Design to Increase Predictability & Velocity

While I’m focusing this blog post on what worked for Imagine internally, it would only be fair to share that a driver of this success has been the increased focus on services in this area that we provide clients.

For years, I’ve exclaimed that strategies and ideas are nice, but at the end of the day, it’s the plumbing that transforms strategy and ideas into consistent action that determines success.

This year we doubled down on our focus on the design of what we’re doing. While this often causes me to get a bit impatient (I like to jump into action), the focus has had dramatic impacts on our ability to generate outcomes and results from things that we’ve been doing for years. This year has shown me that to accelerate success, you often don’t need to find something new to do; instead, you just need to figure out how to do it better.

Reoriented Our View & Use of Content to Align Better With Outcomes

A big initiative we completed this year was a study to uncover and define the real buyer’s journey. This resulted in greater insights and a reorientation of how we view content and apply it to customer acquisition and success. 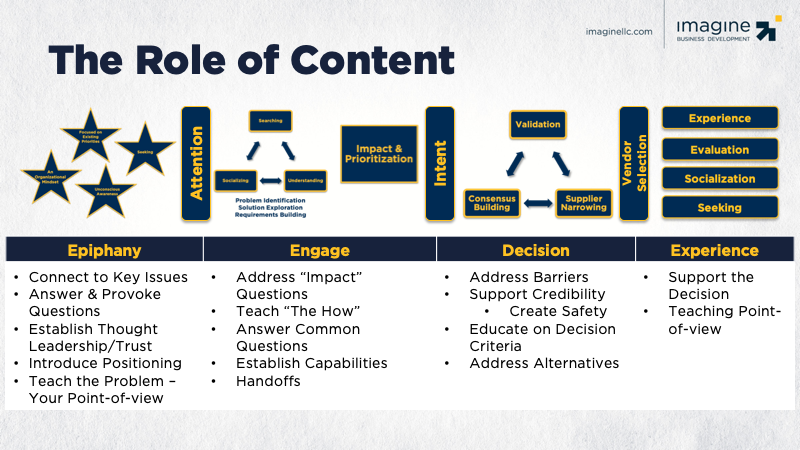 Here’s the net result: In 2018, we generated less content than we have in almost a decade and improved the impact and outcomes of our content efforts.

If you don’t know where you’re going any road will get you there. The biggest change I’ve made personally is to be maniacally focused on defining, clarifying and constantly communicating the Objectives and Key Results we’re shooting for. The net result here is strong momentum and better teamwork than ever.

What Could Have Made It Better For Us In 2018

In the middle of 2018, we put some serious time and effort into implementing a defined approach to take advantage of chat. The “juice” has not been worth the “squeeze” for us.

Going into 2019 we haven’t given up on chat, but we know that for it to work for us we are going to need to change our approach to it meaningfully. What’s more, while improving this effort is on our objectives list for 2019, it is not (yet) an OKR and doesn’t have an owner for it. The reason for this is an example of some of what I’ve learned over the last several years for how to drive traction with new efforts.

I should also point out that while this hasn’t worked for us, it is working for several of our clients, which is a great reminder that each company needs to figure out their unique formula for success.

We did okay in search this year, but most of that is a result of the momentum we’ve built in the past and the ongoing content we naturally create. We came into the year with some clear goals for search and we came nowhere near meeting them, and I’m pretty sure I know why.

We stopped paying attention and we eliminated from our key metrics dashboard. We did this for two reasons:

We really wanted to utilize interactive content to create greater impact and came into 2018 with excitement after making some investments in the ability to create such content. The result of these investments and efforts?

Drum roll, please…We published a grand total of 0 pieces of interactive content. We created some, and wasted a bunch of time (and money) playing with the capabilities we added, but absolutely nothing came of it.

Looking back I realized there were 3 reasons for this failure:

That’s our 2018. Pretty good, if you ask me. What about yours? What did you learn this year? 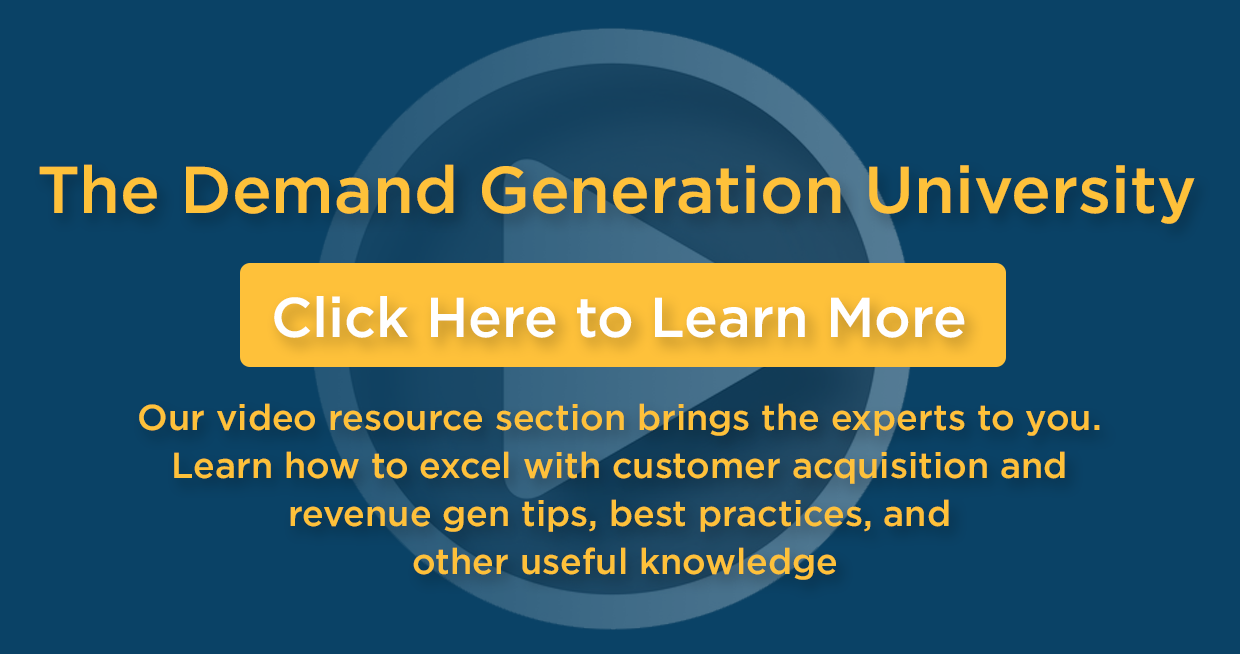 I just finished booking our family vacation. We’ll be spending a week at a fabulous resort on the...

Few topics get as much attention as outsourcing does. It's too bad that so much of that attention...

What Is Revenue Operations

Revenue operations (RevOps) is a hot topic these days, and there are very compelling reasons....