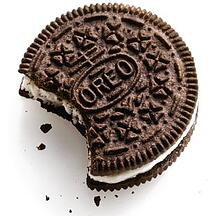 At one of my speeches recently, I was talking with an attendee on the difficulty he was having getting prospects to respond.

As he shared his experiences with me, I came to understand that:

I spent some time with him in an attempt to simplify his message so that people who hadn’t worked with him could understand why they would want to talk with him.  While he listened intensely, I could see him struggled with making his message simple.  “It’s more complicated than that,” he would tell me; or, “And we do much more than that.”

What I wanted him to understand was that it’s his job, and the job of his selling organization, to make his message easily understandable.

“Make it consumable – make it like junk food,” I said.

Marketers have understood for years that positioning yourself as the proverbial “spinach – it’s good for you” is not an effective strategy.  Why do more people eat Oreo cookies than spinach?  Because Oreos taste better and are more easily consumed.

The same is true when it comes to messaging.  People are too busy and too crazed.  They don’t have time to think, so stop making them do it.  Do the thinking for them – make it easy – you’ll see your sales soar.

How To Make More Sales

I was having breakfast at a hotel this morning before a speech.  A business/sales meeting was...

The marketing function (at least as most business executives define it) has been undergoing...

Business to business (B2B) sales can be very complicated. There are lots of issues that impact a...