How To Blow A B2B Sales Opportunity In One Easy Step

When I’m coaching sales teams today I often find myself envying their opportunities. Back in the day (I’ve always wanted to say that), identifying the right companies and people was a burden. I remember spending afternoons in the public library (remember those?) researching the Thompson Register and other tools to get a list of potentially qualified companies and names.

Back then; the only way to learn about prospects was hard, manual work of research and calling. I’d pick up the phone with the intent to reach the receptionist, just to be able to ask some questions so I could customize my outreach to my target name. For someone who is not naturally a researcher, this was quite a painful process.

Then the World Wide Web became popular, and instead of going to the library I could sit at my laptop and learn more about my prospects and develop theories about their needs.

Making matters worse, identifying them was less than half the battle. Then I had to go through the arduous process of actually connecting to them. I’d cold call, send letters and even show up at their offices, all in attempt to make a connection and be heard.

Back then if someone had told me about an idea like LinkedIn, blogs, Quora or Twitter, I would have laughed, thinking it was the works of someone like Gene Rodenberry and Star Trek. But today they exist and they are extraordinarily powerful in enabling salespeople to do their jobs more effectively and efficiently.

How to Destroy A B2B Sales Opportunity In One Easy Step

Just yesterday I accepted a LinkedIn request. Less than four hours later, I got the following message: 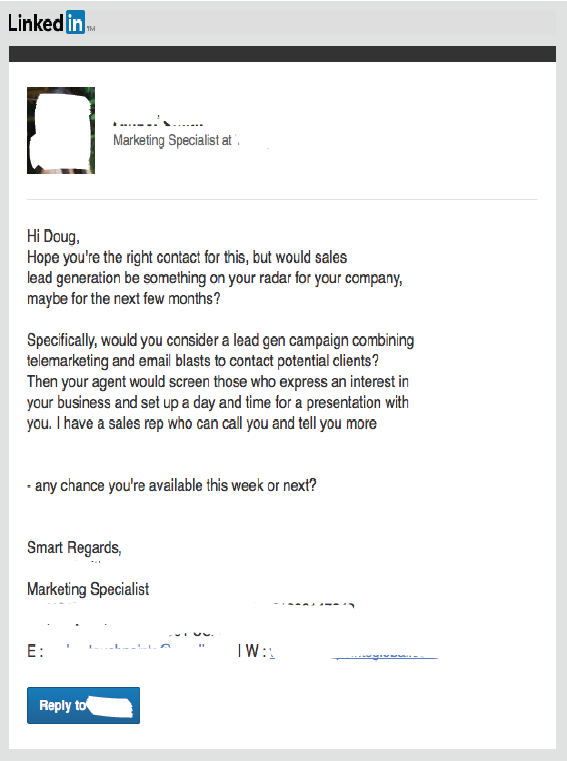 Now, I’m sure that the the rep was only doing what she was told, but seriously, is this something that people think works?

Let’s forget for the moment that we offer the very service she is proposing that I talk with her about. Is this an inquiry I should take seriously? I mean I’m sure she’ll get some responses, but think about the quality of the response.

What is the sender doing wrong? Simply put, she’s peddling. She’s created absolutely no value and made no connection whatsoever, and now she wants me to talk to a sales rep (like I’ve got nothing better to do)?

I think LinkedIn is a goldmine of opportunities for enterprising salespeople. We’ve seen a significant increase of qualified leads coming from LinkedIn and are also seeing new business that originates almost completely within LinkedIn.

However, the game should not start with you blasting new (or old) contacts with crappy pleas. Instead, use the tools to connect and engage.

Here’s how the rep could have turned me into a fan:

The bottom line is to be a person, and treat me like a person. Don’t treat me like a target. Does the approach I’m recommending take a bit more time? Well yes, but the impact and conversion rates will do more than make up for the time.

For small and mid-market B2B companies, generating enough quality leads has always been one of...

Why B2B Sales Organizations Are Missing The Boat on Marketing

I recently attended a major conference focus on marketing. One of the general session panels...