To Sell or Not To Sell...That Is The Question 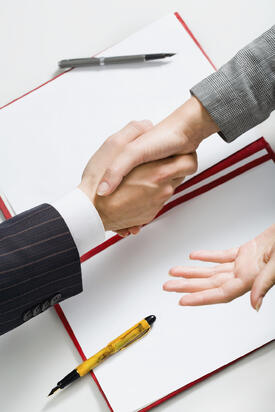 A fascinating conversation emerged on Twitter last night, initiated by a post on LinkedIn titled, Why This CEO Will Never Hire Another Salesperson. Two of my favorite sales thinkers (Mike Weinberg and Anthony Iannarino) weighed in on the subject.

The post that provoked the conversation (which has clearly hit a nerve since it has more than 2,000 comments) attempts to make the argument that salespeople are no longer necessary (and may even be harmful) in today’s new world.

At Aha! we purposefully don't have a sales team nor do we pay commissions on new customers. That's because we believe it drives the wrong behavior and outcomes.

To support his argument he quotes a research statistic that I often use myself; that 60% (or more) of the typical purchase decision is made before talking to suppliers or sales reps.

Iannarino wrote a post that appears to be equally popular taking apart that claim. In his post he put forth this argument:

He also believes the data (data which I believe to be deeply flawed, self-serving, and erroneous) that up to 60% of a buying decision is made before talking to a supplier and 90% of the buying cycle is complete. If this last point is true, then more sales organizations and salespeople have stopped prospecting and nurturing their dream clients than I would have ever imagined. And if that last point is true, you should right now be experiencing a massive increase in incoming calls from people who have all but decided to hire you. [Note: The sound you hear is the sound of your phone not ringing.]

I became aware of that post when Weinberg tweeted:

Those who know me know that I’m a big believer that data trumps opinion. This led me to inquire about what the basis was for dismissing the findings of how B2B customers buy, which then led to a great Twitter conversation.

Do B2B Salespeople Still Have a Role In This “Brave New World”?

Increasingly I see two camps emerging. There are the social selling/inbound marketing radicals who say sales is dead, everything should be done online, on Twitter, LinkedIn, Facebook and the like. And there are those who claim that all this new world stuff is a bunch of hooey, buyers can’t make good decisions and salespeople need to be the ones to drive decisions and purchases.

The reality is that neither camp is right (or wrong), and the problem that’s killing company growth opportunities is that far, far too many people act as if inbound and outbound, or social and traditional B2B selling approaches are mutually exclusive. To get through this we all need to agree that this is not an “either/or” decision, it’s an “and” one!

What About The ZMOT?

I am on record saying (some would say preaching) that The Zero Moment of Truth (ZMOT) is the biggest change in the selling/buying process since the creation of the professional procurement function. It is true that customers have revolutionized how they learn, research, consider and decide, and the vast majority of sales approaches have (at best) changed incrementally.

I don’t think anyone would disagree with the fact that historically when a prospect needed to learn about options available in the market one of the first things they did was reach out to a salesperson, and today they turn to Google. Think about it, in 1995 if you wanted to know the price of an airline ticket or the price of a stock, what did you do? You called a travel agent or stockbroker (both are simply another word for salesperson). What about today?

Too simple a sale you say? What if you realized you needed a greater printing capability and to learn the options that are available, the price range for various levels of capability as well as the advantages & disadvantages of the options and various customers’ experience? Or, you needed an ERP system? The first thing most prospects did was call a salesperson (or several salespeople). Today they go online and Google.

That first interaction (the “first moment of truth”) was crucial to the success or failure of the sale. In the B2B, complex sales world there simply was no viable ZMOT until the last decade. Today, salespeople can no longer rely on merely having access to information to provide value; they must be able to curate and create value to win!

What About The Research?

First, let’s make sure we get the research’s findings correct: A CEB study of more than 1,400 B2B customers across industries revealed that 57% of a typical purchase decision is made before a customer even talks to a supplier. That finding was from 2011, and in 2013 CEB increased the percentage to 65%.

Here are some important points to consider:

All that said, the research is often misunderstood and even more frequently misapplied. Sirius Decision has a great post about Three Myths of the “67 Percent” Statistic.

Here are the important points:

Is there a role for the B2B salesperson today and in the future? Damn right there is. Salespeople with business acumen (or my preferred term, Businesspeople Who Sell) are more important than ever.

However, the days of the lone wolf salesperson who goes out and “makes it rain”? Not so much. Not only has the solution they're selling magnified in complexity, but the environment that our prospects operate within has exploded.

To win and to create predictable, sustainable and scalable growth engines companies must integrate a modern-day sales approach, with modern lead generation and management processes. Such integration and alignment makes everyone more productive and effective.

3 Ways Salespeople Can Use Social Media to Sell Better

Take a quick minute to think through your last online purchase…how did you hear about the item? Was...

Sorry Virginia, There Is No Inbound Selling

We’re coming to the end of the year, and we’re a little overdue for one of my rants.  And this one...

Last week I talked about the opportunities that are present to create real value in the sales...