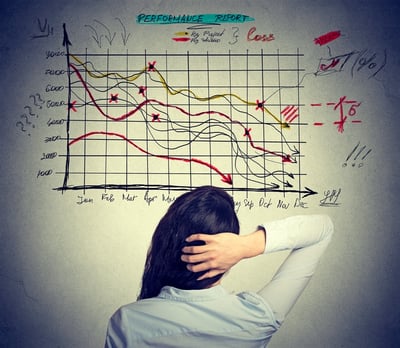 The story of Moneyball is a powerful one. Despite its popularity, its central thesis is often overlooked. While many people point to the new analytics that Oakland A’s general manager Billy Beane identified that others ignored, the real power (and advantage) was in their ability to determine the metrics that everyone else valued that, in reality, did not lead to success.

The time has come (more accurately the time is long past due) for Moneyball to come to marketing and sales.

Twenty-first-century marketing, led by the movement to inbound marketing, made a compelling promise: greater insights, fast & better decisions and the ability to separate the “signal from the noise.” Businesses of all shapes, sizes and industries would finally be able to stop debating opinions and feelings and would be able to rely on facts and data.

The reason? People measure the wrong things. The vast majority of metrics used by marketers and executives are what I call “vanity metrics”. What is a vanity metric? It’s a metric that can make you feel good but is not an indicator of success or advancement.

If they’re ineffective, you may ask, why are vanity metrics so attractive? For two reasons:

Identifying, tracking and utilizing metrics that actually contribute to success are hard to detect and uncover. I recently shared an example of a set of metrics we regularly use in guiding our business and advising our clients.

I love metrics, but it’s important to note that it’s better to have no metrics than to focus on the wrong metrics. Today I share 10 of the most popular metrics that are used by the vast majority of practitioners but do little or no good.

I still remember when 1,500 visitors to our website was a good month. Given that we advised clients on lead generation, I was embarrassed about our traffic. Then we got a client whose site was getting 10,000 visitors a month. Despite the difference, we got better results from our site than they did. That was my first clue that maybe “growing traffic” wasn’t quite as significant as initially thought.

After 5x-ing traffic to our site (while not 5x-ing sales opportunities or revenue), I decided that we didn't need to keep as much focus on growing traffic. Almost immediately our traffic began to decrease, bottoming out with about a 20% reduction in monthly visits. Yet our pipeline was stronger, and we were creating more bona fide sales opportunities.

I learned a valuable lesson: the number of people visiting a website is not a particularly important variable; instead knowing who is visiting is what is most important.

Everybody's looking for leads (I'm still waiting for my Glengarry leads). The world seems to be obsessing over lead volume. Frankly, the entire inbound marketing movement is much to blame for this becoming such a vanity metric. I attend conferences where everyone's bragging about how many leads they were creating for clients. What was funny is that no one was talking about how much revenue they were creating.

What I care about is:

Tracking leads is easy...increasing the volume of leads is much harder. However, generating quality leads that progress through the funnel is intensely difficult and is only made harder when you are not tracking the right things.

I know a plethora of marketing consultants and agencies that would have a field day here (admittedly, I'd probably be one of them). We'd start telling you about opportunity costs, optimization and we'd present a series of strategies to improve your conversion rate (with a big retainer to back it up).

But so what? It's not a particularly meaningful metric. First, it only measures new leads sourced by the website. Second, it doesn't consider the quality of the lead. Third, it doesn't take into account the status of your existing funnel.

This metric is popular because it's easy to measure and relatively easy to improve.

I don't think I need to spend much time on this one, as most people get that it doesn't mean anything. But, for some reason (oh yeah, it's easy to measure and improve) it's still often used.

This is probably the most commonly reported email metric and a proverbial ton of content is regularly written on this subject. Yet again, the metric doesn’t really tell you anything that’s predictably actionable in the attainment of an outcome (other than a marketer or agency keeping their job).

What’s sad is that, not only is it not a particularly useful metric, it’s notoriously inaccurate. A growing number of email readers can be set (or are set by default) that don’t record someone opening an email. What’s more, opening an email doesn’t mean anything. Technically I open 80% of my emails, but I only look at about 20% of emails I get.

This one is going to be controversial; afterall isn’t a click what we’re all after when someone sends an email? I’d admit that, yes, I do want someone to click my email, but the metric alone doesn’t mean anything. Here’s what I really want to know:

I’m not saying you shouldn’t review these metrics. I’m saying that you should view them in the same way baseball experts view batting averages - they note it and they realize that it doesn’t really mean anything.

The battle cry of the SEO crowd. “When we started you had 7 keywords in the top 10 on Google, and today you have 76. What’s more, we’ve increased your organic traffic by 376%.” My thought...who cares?

Look, I know that all things being equal, more keywords in the top 10 is better than fewer, but I ask the same questions I’ve asked throughout this post. I still remember about five years ago I was working with a client that hired an SEO “expert.” For two years my client paid this person a solid monthly retainer.

He would regularly tell me about how well things were going and how great this consultant was. His traffic was rising at an accelerating consistently. Then at the end of two years he added it all up. He had paid more than $70,000 and he couldn’t identify a single bona fide sales opportunity connected to the effort. For me, what was even scarier was that he couldn’t conclusively determine whether the effort had contributed, he simply didn’t know (and could only assume). I’d like to say this is an example of a bygone era, but it happens every day.

This is simply another version of leads, discussed above.

Bounce rate measures the percentage of times that a visitor to your site visits only one page before they exit. So if your bounce rate is 60%, it means that for every 10 visitors to your site, 6 exit the page without going to another page.

Now if you’re doing pay-per-click, then bounce rate is a crucial measurement. It’s an epic fail every time you pay for someone to come to your site, only for them to immediately decide that the page they came to is irrelevant.

But if your building a new audience or you’re dealing with a topic that has a broad appeal, a high bounce rate isn’t necessarily bad. Bounce rates only matter in the context of a broader strategy and its relevance is highly dependent on the tactic being employed and the purpose of the tactic.

I call this “database envy” and I discuss it heavily in this post on the most important growth dashboard in my arsenal.

As I wrap this post up, note that I am not saying it’s useless to track these metrics. At Imagine, we track virtually all of these metrics. However, they’re only useful to the extent that you dig deeper, align the analysis with your specific situation and objective, and connect them to outcomes.

Moneyball came into existence in 2002. It became a mainstream phenomenon when Brad Pitt and Jonah Hill starred in the movie released in 2011. But note, the concepts of Moneyball originated in 1971 when Bill James, the father of stat nerds, introduced a concept he called sabermetrics.

Sabermetrics was ignored and ridiculed until a team with no choice decided to give it a try. Even as the Oakland A’s had success with it, the powers of baseball laughed it off. It’s too complicated, claimed many. Others rested on the false note of confidence that “these (old, ineffective) metrics have been used for decades, if they weren’t the right ones they wouldn’t have been used.”

Today Moneyball isn’t even really a thing anymore. It’s the standard. Learn the lesson that Billy Beane shared. Dig deeper and focus on metrics that matter.

Wow…there are a lot of things marketers can measure these days. For years, it was difficult to...

[Video] The Most Important Metric to Predict Growth

We talk a lot about metrics at Imagine. There are some good reasons for it. Among others, it's one...

Next week, I’ll be in Boston for the largest gathering of marketers in the world, HubSpot’s 2016...