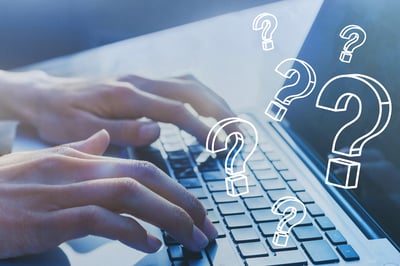 Recently, Imagine signed a client, which is always exciting. Because I hadn’t been actively involved in the sales process, I went to their website to do a little digging. I wanted to see what they were all about.

Unfortunately, I walked away with absolutely no idea about what this company did. Their website had almost no information. It felt like it had been designed by someone who already knew everything about the business and didn’t understand why someone else might need more information. When I checked in with one of my coworkers, she was equally baffled.

“I can’t...figure...it out either?” She spoke haltingly, her voice rising so that her statement became a question. Then we both laughed, relieved we weren’t missing something really obvious.

Later, we conducted an in-depth interview with the client and got a rundown about the many things the company offers. But you never would have guessed that by looking at their site. (Luckily, one of our very first projects was redesigning the website. Whew!)

The thing is, this company’s far from alone. Way before someone decides to sign a costly contract--in fact, before someone even gives you fifteen minutes of their time--they’re going to look at your website to figure out what you can do to help them. If they don’t see any possibilities, you won’t even get a shot.

Quite a while ago, our CEO Doug quoted the “explain it to me as if I were six-year-old” line from the movie Philadelphia. In the film, Denzel Washington plays a trial attorney who asks his clients to lay out their stories as simply and clearly as possible so there’s a shared starting point for everyone in the room.

That same premise is a good guideline for content.

That’s because your prospect has likely never thought about your company before you come calling. Your site--and the rest of your content--should give the prospect a knowledge base. The problem is that many companies are so in love with their own solutions that they jump right over the basics to try to prove to prospects how they can solve all their problems. One issue with that is that companies are pushing solutions before their prospects fully understand what they do. They’re trying to teach algebra before addition.

The reality is that, if you’re a B2B company, your website alone isn’t going to close a sale. As you likely already know, there’s a heated debate about the number of minimum touches to close a B2B sale. Of course, it varies depending on a number of factors, including the cost of what you’re selling and the pre-existing level of customer awareness and interest. Regardless, the absolute minimum of touches to close a sale is usually considered to be seven, and at Imagine, we tend to believe it’s more like ten.

What factors in more than anything else is the quality of your touches. That’s because prospects want to feel at least some confidence that exploring your solution won’t be a waste of their time.

In other words, explain it as if your reader was a six-year-old. That doesn’t mean talking down or condescending to your prospect. It means laying out what you do and how you do it and providing some “deeper” content for those who really need to dig in to understand something. Your content should also answer common questions and straighten out misconceptions you often encounter. You can do that all proactively in your touches--especially if you use your touches to explain and persuade, rather than as a straight-up “buy my stuff” sales pitch.

For example, another client of ours, beloved internally for their efficiency and willingness to test new hypotheses and tactics, fights this curse of being too on-message. What does that mean? The company is so good at internal messaging about what they can do for customers that every sales rep within that company stays extremely focused on the problems their solutions solve. And that’s great in many ways, but not when you’re working with a prospect who isn’t even totally sure they have a problem, let alone ready to hear about what solution will work for them. (Don’t worry--we’re not talking out of school! We’ve had discussions with the client about this and they totally agree that they often get ahead of their prospects.) So, if you aren’t getting the sales you should, or if the sales cycle is taking far longer than it should, make sure you’re laying out what your company does. It’s always a good idea to find someone unfamiliar with your business and ask them to look at your site and tell you what you do. If they can’t--or they’re wrong--you may want to re-examine your messaging.

Lay the foundation of what you do for a prospect. “Talk” to them like they’re a six-year-old. Then, when they know they have a problem and are looking for specific solutions, you can graduate from addition to algebra.

WSSD – What Should Starbucks Do

I haven’t sparked as much conversation with a blog post or observation as I did with my recent post...

6 Ways You're Scaring Your B2B Leads Away

Everywhere you look these days, there’s something that’s been designed to give you a chill. From...

What is a Proposal & Why Your Business Should Use Them

When talking with anyone who is interested in your services, where do you send them to look at...