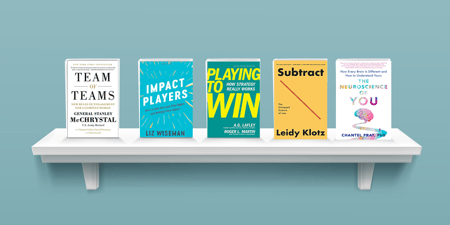 It’s an end-of-year tradition for newspapers and magazines to do a “Best Of” roundup so as the year draws to a close, I thought it would be fun to do the same. I’m an avid reader of books—and I’ve also gotten really into listening to audiobooks as I take walks—so I have many thoughts (which probably won’t surprise anyone who knows me or who listens to The RevOps Show Podcast).

However, while newspapers and magazines usually focus solely on books that were published in the past year, I’m not paying attention to the publication date.  My “top 5” list features books I read in 2022 that truly changed my way of thinking and gave me a new way to approach RevOps.

If your New Year’s resolution is to read more, here are my mini-reviews—all with specific RevOps takeaways—of the books I would recommend: 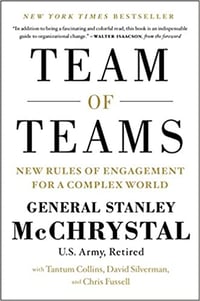 1. New Roles of Engagement for a Complex World by General Stanley McChrystal

As I’ve said before, I believe that the twentieth century was all about efficiency; the twenty-first century will be about resiliency and adaptability. That idea was one of the main topics of this book, which was based on the author’s experience in the military.

The author is a retired four-star general and the former commander of U.S. and International forces in Afghanistan. He also oversaw the Joint Special Operations Command (JSOC) in 2004, which was the peak of dealing with Al-Qaeda. After he retired, he founded a business consultancy that focuses on how crises force organizations to adapt by finding new ways of working while dealing with uncertainty.

Although the book is more focused on business than on his military experience, McChrystal addresses how Iraq and Afghanistan made some very smart people in the military realize that the world had truly changed. That’s because Al-Qaeda was winning even though, by every single measurement and assessment, the US military was far more powerful and efficient.

The main reason? At that time, the military was still a very centralized command-and-control sort of organization as opposed to a distributed one. It was robust but not very adaptable—which was a problem because, in complicated systems or during times of change, adaptability beats efficiency every day of the week and twice on Sunday.

The command realized that the military had to become decentralized in order to defeat Al-Qaeda. That was a big mental shift for someone like McChrystal, who came of age and rose to power in a centralized command environment. To succeed, he had to lead a fundamental transformation of the organization.

The RevOps takeaway: McChrystal’s examples were a great demonstration of something I’ve believed for a long time—that successful distributed execution demands a strong structure. Many businesses struggle because they buy the idea of adaptability, but only pursue it using half measures. They neglect the centralized systems and processes that enable that freedom—and that’s where they fail. Decentralization should not enable laziness, sloppiness, or chaos. It’s not an easy or simple process and it must be done correctly if you want to reap the benefits. 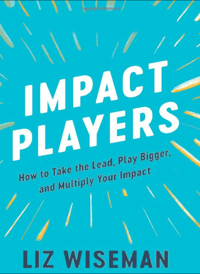 2. Impact Players: How to Take the Lead, Play Bigger, and Multiply Your Impact by Liz Wiseman

Let me preface this by saying that this book impressed me enough that I bought a copy for everyone who works at Imagine. Liz Wiseman is amazing at providing theory, but her real talent —at least for me—is delivering real-world applications and examples.

When I finish reading something, whether it’s a blog, white paper, or book, I want to walk away with a new perspective or some practicable elements. This book, which outlines five key elements that go into being an “impact player,” is essentially a playbook for positive change. I wasn’t left wondering about the next steps, which I appreciated.

The thing that I really liked about it is that every person is probably going to walk away with a different lesson. Although it has five elements, it’s not formulaic. It’s open to interpretation, depending on your style or personality. It doesn’t dictate that introverts need to be extroverted or extroverts need to tone themselves down. It's a recipe that I think can work for just about anybody.

Wiseman’s equally excellent book Multipliers came many years ago and much of what it espoused is now standard. It really changed everyone’s way of thinking, so I was excited to read Impact Players. I believe it will also have a major effect on the ways people approach business.

The RevOps Takeaway: Reading this book impacted how I think about my contributions. The framework gave actionable items to practice. The result was the feeling that if I worked toward doing a little more every day, the effects would build, resulting in more impact.

As a manager, this book also gave me more perspective on how to view people. That’s one reason I gave it to my employees. It provides a more common vocabulary so people can understand each other better.

That structure I talked about above in my review of New Rules for Engagement? I’d say this is a building block of it. 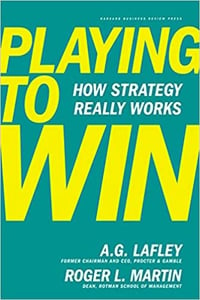 3. Play to Win: How Strategy Really Works by A.G. Lafley and Roger Martin

One of my pet peeves is the way the word “strategy” is thrown around. It’s one of the most misused and misunderstood concepts in business, and as a result, the term has almost lost its meaning.

This book brings the perspectives of A.G. Lafley, the former CEO of Proctor & Gamble, and my favorite academic strategist, Roger Martin, a former dean of the Rothman School of Business at the University of Toronto. They believe that strategy boils down to making specific choices based on five major questions:

1. What is your company's purpose or winning aspiration? Everyone talks about winning, but almost no one defines it—highest revenue isn’t a great measurement. As a former college baseball coach, I can tell you that you must know the game that you're playing and how to win. If you try to win by someone else’s definition of winning—for example, a consultant who comes in and puts together a beautiful plan that doesn’t play to your strengths and weaknesses—you’re probably not going to win.

2. What are your target markets? This question defines your playing field, which is a necessary and often overlooked step.

3. How will we succeed in those markets? This is where the questions become more active. You need to understand what capabilities your company needs and how you should be managing. In business, many people talk about differentiation, which is crucial, but all, all too often we don't give it the consideration it deserves. In other words, you can't play the game the way somebody else will because that kills your differentiation.

4. What capabilities does your company need in order to win? Most of us talk about differentiation, which is clearly an important piece of the puzzle, but all, all too often we don't think about the real means to get there.

5. How should you manage your company in order to win? Just as you can’t play the game the exact same way another company would if you want to differentiate yourself, you can’t manage the same way. What matters is managing with the right intent—and that’s often overlooked.

You need the answers to these questions to have a shot at winning. As the authors write: “A strategy is a coordinated and integrated set of where-to-play, how-to-win, core capability, and management system choices that uniquely meet a customer’s needs…it is only through making and acting on choices that you can win. Yes, clear, tough choices force your hand and confine you to a path. But they also free you to focus on what matters.”

The only downside is that the book is very Proctor & Gamble-centric, so it assumes a certain level of resources. While the examples are illuminating, there’s no direct translation for those of us running a small or mid-market business. Realistically, if I try to play like P&G, I will not win.

However, Lafley and Martin do detail their techniques to make real decisions, so it works really well as long as you aren’t looking for a straight-up instruction manual.

The RevOps Takeaway: This book gives five actionable questions to help clarify your purpose. I see a lot of companies that resist defining themselves because choices are about exclusion. If you’ve decided not to focus on something, that can sometimes feel like a lost opportunity instead of a gained one. This book helps explain why you must make those choices in order to play to win.

In terms of my own use, these questions have not only helped me build a roadmap, but have helped me evaluate whether I’m on course.

4. Subtract: The Untapped Science of Less by Leidy Klotz

Subtraction is often overlooked, especially as a means for change and progress. For centuries, looking for more was the only thing we knew—and the world is paying the price for that.

Now many of the highest-valued segments of the world are focused on subtraction, whether greenhouse gases, carbon, disinformation, etc.

The RevOps Takeaway: Recognize the value that comes from doing less, which helps you become more focused on the things that will help you reach your goals. 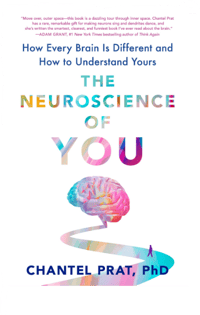 5. The Neuroscience of You: How Every Brain Is Different and How to Understand Yours by Chantel Prat

That said, I’ve read about fifty books about neuroscience and, while most are fascinating, they tend to be dry. This book was both enlightening and entertaining, especially considering the dense subject. In my opinion, it’s a truly fascinating book that allows you to understand more about yourself and, by extension, more about others.

After reading this (or listening to it, as I did), you'll understand other people better, but what's really cool is you'll better understand how your brain works. One of my favorite observations from Prat was that, early in her research, she discovered that most brain research has been consolidated, for lack of a better word. Cognitive psychologists are so focused on trying to describe the “normal” or average brain in terms of brain function, they often eliminate the outliers from their research.

Because results are typically presented as summaries or averages, the research can miss what is going on in individual brains. This mythical “average” brain is actually quite unlike almost any actual person’s brain. For example, Prat’s research shows how the left and right hemispheres of the brain work together quite differently in different people for varied outcomes in terms of information processing.

The RevOps Takeaway: While there’s not necessarily one business-oriented takeaway, this book does help you think about how to play to your strengths. Prat also tells an interesting story about London taxi drivers, who famously have to learn all of the city’s streets and pass a test to become licensed. Their brains actually change as they learn this information and it’s a nice reminder that just because something doesn’t come naturally to you doesn’t mean it’s out of reach.

So, that’s my top five! I hope you enjoyed my reading list. If you read one of these books (or have already read one) and want to have a discussion, please reach out. I’d also love to hear your recommendations.

Many entrepreneurs have wondered about the relevancy of the good, old MBA.  Talking about such...

How To Stop Overcoming Objections & Double Your Results

Walk into any bookstore, or read any sales oriented magazine and you'll see the primary focus on...

Getting Through The Recession

It is not new advice - I remember hearing it when I was eight years old and my parents owned and...