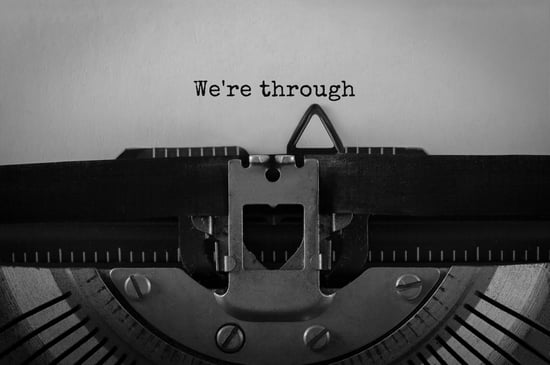 If you’re in sales, there are two things you can count on:

It’s a particularly frustrating experience when prospects seemingly disappear. Part of the reason for this is that there’s a bit of a time warp from the perspective of a sales rep vs. a prospect/buyer. I advise people to realize that to a sales rep, every day feels like a week, but to a buyer, every week feels like a day.

While that time warp certainly varies and there’s no science behind it, it illustrates the ambiguity that exists. If a salesperson acts too aggressively or desperately, they could create the very problem they’re worried about avoiding. Wait too long, and the prospect could easily forget about things or have their attention diverted to some new issue. (Time kills all deals.)

I sell as only a part of my overall responsibilities here at Imagine, and I deal with at least one of these situations every week. Full-time sales reps may deal with this every day.

This is where the breakup email comes in. 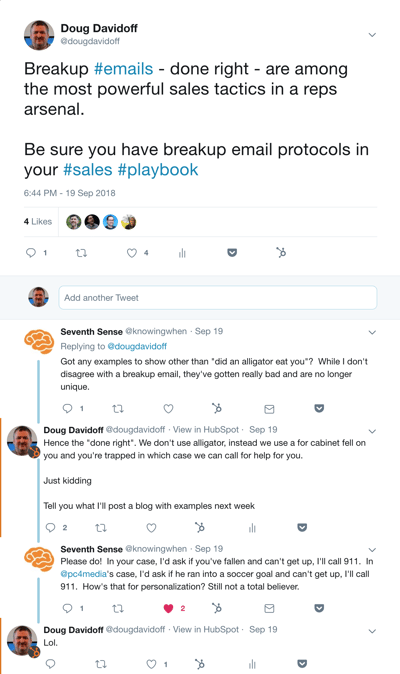 Breakup emails (done right) are, unequivocally, the most effective tools in a sales rep's toolkit. For me, my biggest challenge with breakup emails is not overusing them. (More on this below.) I often find myself wanting to jump to them too early because they’re so effective.

In putting together this post, I grabbed my email analytics and here’s how the breakup email performs in our prospecting cadence efforts (in a universe of 2,500 emails where breakup email account for just over 10% of the emails):

For our active sales efforts (unfortunately the data set is too low and not every email is tracked so I can’t give comparison number) ,we get a 70-85 percent response rate on our breakup emails.

Yet, despite this, breakup emails have a bad name, as my friend and podcast cohost Mike Donnelly shared in a Twitter exchange that prompted this post.

To acknowledge Mike’s point, there are a lot of bad breakup emails that are used, but that’s because of the execution, not the tool. I promised Mike and others that I would share the rules we use to create effective breakup emails.

The 5 Rules For Effective Breakup Emails

1. Have Good Conversations & Write Meaningful Emails In the First Place

If you have a short attention span, this is the one rule you must remember - and, candidly, the primary reason that so many breakup emails suck.

Before you can have a good breakup email, the emails you send before the breakup email must be good, valuable emails. So must your conversations and voice mails. If you’re sending out shitty emails, your breakup emails are going to be shitty - no matter what rules you follow.

We spend an inordinate amount of time crafting our outbound and follow-up emails. There’s no cheating.

There’s one email--lovingly referred to as the "alligator email"--that is blamed for the “fall of the breakup email.” (Nobody explains why it’s so hated as well as my friend John Barrows; you can read his thoughts on it here). I’m willing to admit two things:

The reason everybody hates it is that so many salespeople used it. And the reason that so many people used it was because it worked…extraordinarily well. It got a laugh and a response. But, as Yogi Berra would say, it became so popular that nobody wanted to use it anymore.

While I don’t know who originally created the alligator email, I’d bet that he/she is a pretty funny person. They probably use sarcasm regularly in communication, and one day, when a prospect had seemingly disappeared they dropped the line, “…or maybe you got eaten by an alligator, in which case, I can call 911 for you.”

It worked because it was a genuine response. Then everybody copied it, and it was no longer genuine.

A good breakup email, like any good email or communication, must be genuine. It must sound and feel like you. When I coach salespeople, I often talk about having a best friend’s conversation, and this type of conversation is a little different for everyone.

I’d bet I talk to my best friends differently than how you talk to yours. So in sales (or any other type of communication), we shouldn’t try to sound the same. I should sound like me, and you should sound like you.

So, the next time you need to send a breakup email, write a genuine one and see what happens.

You have to earn the right to send a breakup email. This means you must meet four criteria:

These three criteria are all relative to the situation you’re in when communicating.

I regularly get breakup emails that start with something along the lines of, “Doug, I’ve tried emailing you seven times…”

A prospect is not going to respond to your email because you want or need them to. They’re only going to respond because they feel it’s important. A strong breakup email highlights the consequences (positive and/or negative) for responding/failing to respond.

Be clear, and be personal.

5. Give An Easy Exit

The last rule is to make it easy for them to say they want out. I shared earlier that we get a tremendous response to our breakups, but by no means are they all responses that the prospect wants to go ahead. Generally speaking, here is how the responses break down:

We get these responses because we make it clear that it’s okay to say “no” and we make it easy.

No, I’m Not Going to Give You A Sample (That’s The Problem)

Now many of you may be thinking to yourself, “Doug, this sounds good. It makes sense. But, can you give me an example? Can you provide a sample breakup email that meets these rules?”

As the subhead indicates, I’m not going to do that. You don’t need a sample breakup email; they’re the easiest ones to write. You may need some sample emails to use before the breakup, can you can see some here and here.

Breakup emails are an important communication tool. Use them properly and you’ll create far more clarity in your sales efforts.

In today’s buying cycle, creating effective headlines is more important than ever before. In recent...

A short while back, I wrote about some of the worst cold emails I’ve received. Unfortunately there...

3 Go-to Emails I Use to Advance B2B Sales Opportunities

December has always been a fascinating month for me.  Filled with the anticipation of what the next...