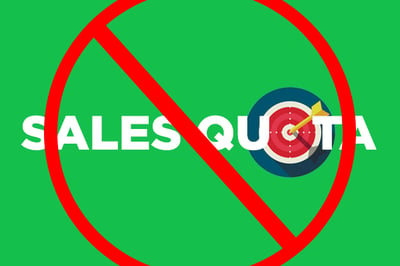 Make the number! It’s probably the three words that dominate the thinking of salespeople and executives everywhere. I’ll admit that over my career I’ve literally had dreams--and nightmares--where making the number was the central theme. (Of course, whenever this happened, I knew it was probably time to take a week off).

Sales quotas (or revenue quotas) are a foundational element of the sales. For most, the only question to ask about quotas is “Where should the target revenue or new customer acquisition quota be set?” Questioning the need, appropriateness, or effectiveness of even setting quotas is sacrilegious in business circles.

But the time has come for those leading businesses into the future to admit that quotas aren’t working. Recent research from CSO shows that barely 50% of salespeople are meeting quota, a trend that has been steadily deteriorating. Anecdotally, many senior sales executives responsible for setting quotas adjust to this reality by setting artificially high quotas and putting more pressure on salespeople.

Earlier this week, I presented a webinar where I revealed some research that we just completed, along with ways to implement strategies that can double your pipeline in 90 days. In this session, I shared that the nature of sales continues to undergo rapid change. If selling is going to remain a viable strategy, leaders must rethink their fundamental assumptions about sales, how they allocate talent and resources towards the sales process, and how they assess and compensate performance.

At the beginning of this year, I determined it was time to take a lead in designing the sales model of the future. As a part of our 2018 sales plan, I eliminated the sales quota as a key metric for our VP Sales. Here's why.

The Three Fundamental Problems With Quotas

1. Quotas Measure The Result, Not The Cause

There was a day when sales systems were built on the premise that closing was the most important aspect of the sales process. “Studies” (I put this in quotes because the studies were highly flawed) showed that if a salesperson wanted to increase sales, the best two things they could do were to:

I was literally taught that I should plan on asking someone to buy at least five times. My sales trainer proclaimed that “You learn how to close by trying to close early and often.” While I admit that, unfortunately, there are still far too many people who believe this, the facts prove otherwise. While salespeople need competent at closing sales opportunities, closing is by no means the most important phase of the sale.

More importantly, we’ve learned that when earlier stages of the sales process are handled effectively, closing is much less difficult. As more sophisticated research was conducted on successful selling, we discovered that all the focus (and incentives) concentrated on the end of the sales process caused salespeople to become less effective. While training, sales process, and sales philosophy have evolved over the last two decades, the fundamental measurement systems have not.

2. It Creates A Short-Term Culture

Long-term value creation. It’s probably the most overused buzzword in the corporate strategy and culture pantheon. Executives constantly talk about the need to focus on the long term, to create value and to align with the buyer.

If you look at any discipline in these organizations (with the exception of sales and marketing), you’ll see that philosophy at work. Manufacturing, operations, human resources, service and even finance have all adjusted to this orientation (and, yes, there are certainly exceptions, but the trend is clear). 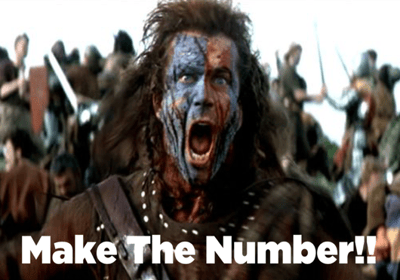 Now, don’t get me wrong, I’m a business owner and I’m self-funded. I understand, firsthand, the importance of revenue and closing business. I get “the number,” because when my company misses it, I’m the one that funds the difference. But, what I also understand is that the actions we took three to six months ago (or 18 months ago) have more to do with how we perform this month or this quarter than anything we do over the last 30 days.

3. It Doesn’t Align With How Buyers Behave

I believe there can no longer be any debate around the idea that today the buyer is in control. In our Doubling Your Pipeline in 90 Days webinar, I shared some key principles we believe in:

The obsession with quotas has created mythical importance to the last day of the month and the quarter and has led salespeople to do insanely dumb things that create tremendous negative equity in the attempt to get one more dollar of MRR (monthly recurring revenue) or gross margin across the line. Selling organizations not only tolerate these actions, they encourage or even require them.

They gladly create $5 of negative equity to gain $1 of incremental revenue. Why? MEET. THE. NUMBER!

It’s no wonder the customers trust your salespeople less and less every day.

By the way, while the stories and examples are easy to articulate on the sales side, marketers are equally guilty. Their marketing plans are all about engagement, education and thought leadership, while their actions are all about driving sales-ready leads today!

What We’re Doing Instead

As 2017 rolled to a close and I was working with my team on our 2018 growth plans (and we’ve got aggressive growth plans), this all came to a head for me. I’ve been sharing thoughts like these for years. I’ve espoused and evangelized a concept that I call What Causes Sales for more than a decade. I teach and I plan on the idea that if we do the things that cause sales and then manage the process effectively, sales and revenue take care of themselves. But, I was still measuring and basing objectives like everyone else.

Now I’m pretty smart when it comes to lead generation and sales (at least that’s what I tell myself so I can sleep at night), but I’ve had a chronic problem from the time I began Imagine. While we promise greater predictability around sales growth to our clients, we didn’t have predictability ourselves.

What’s more, from a sales perspective, we’d constantly pinball between needing sales and not being able to handle them. Our problem wasn’t (and isn’t) lead generation. Hell, we have more leads than we can manage, but all of this effort on lead generation wasn’t translating to consistent sales results.

As I looked at the problem more closely, I saw that despite the growth of leads at the top of the funnel, we weren’t “activating” those leads in sufficient volume to create the consistency and predictability we strived for. As I considered this, I had to admit to myself that I wasn’t surprised by this, as it’s one of the core problems we address for clients. “How about that,” I thought to myself, “we’ve got the same problem our clients have.”

Whenever I deal with problems like these, I go to my core principles of business growth. Once I did that, the solution to this riddle didn’t take long to emerge.

I saw that while the top of our funnel was strong, we never sustained or grew the number of companies we were having those conversations with. And a primary reason for that was that it wasn’t anyone’s job to make that happen. That wasn’t our “number.” I knew that if it was, we could grow the base of companies that we were just having good conversations with, and if we managed the process properly, sales would take care of themselves.

The time had come to change how we scored the game, and 2018 was the time to do it. So, while we have targets for new clients and new revenue, I eliminated the quota on those numbers and changed the objective Ryan is accountable for.

Here’s what I replaced them with:

Targeted Marketing Qualified Leads (TMQL): To make this work, we had to create a new funnel designation. A TMQL is not a sales qualified lead (SQL), because they’re not ready for a sales process. They fit our profile, have the means to do something, and we’ve connected with the right people in the organization--but there is no defined need. In the past I realized that, because we’re really good at selling, we’d been “able” to get these leads into our sales process. Our success rate when we prematurely got people into our sales process was not good.

A TMQL is a person that is actively engaged with us; we’re talking and having meaningful conversations around the issues that impact customer acquisition. These are people who are asking us questions, attending webinars, calling us, and that we’re helping. So, Ryan has a quota of 175 TMQLs. He’s responsible for building (initially) a base of 175 leads who are having ongoing, deepening conversations around issues related to growth and customer acquisition. By the way, my quota is 50 TMQLs.

Meaningful Conversations: At Imagine a meaningful conversation (on the sales side at least) has two parts to it:

I know that if we build a base of TMQLs where we have ongoing meaningful conversations, needs will arise and we’ll be in a strong position to win business. Frankly, once the need emerges, making sales is more about managing process than anything else.

A note on compensation: It would be unfair of me if I didn’t share that Ryan is still compensated on new business, so there’s still a clear incentive for him to generate business and to be sure that he’s not wasting time on the wrong people.

I should also acknowledge that this approach places more responsibility on the process for managing sales and salespeople, but that’s something that I think needs to be there regardless of the incentives, objectives, or key metrics.

In the spirit of full transparency, I’ll share that the first quarter didn’t work out so well. To be blunt, it sucked. Taking the focus away from generating new sales opportunities meant that very few new opportunities were created (and, honestly, the ones that were created happened because a prospect reached out to us to get things started not because of any action we took). What’s more, we didn’t come anywhere near close to our TMQL goal. I’d be lying if I didn’t tell you that I was worried on April 1st.

So, I talked with Ryan and asked him what was up. As we reviewed his quarter we identified two key issues at play:

The power of the status quo -- the traditional sales approach -- is strong. Change isn’t as easy as merely adjusting metrics and reviews. It requires reinforcement, training, skill development, and tools.

The good news is that we dug deep. I spent more time explaining the strategy and working with him so he could understand how creating an environment where sales can occur is more powerful than pushing things through as hard as you can. I also spent significant time developing and improving the tools that enable Ryan to have ongoing meaningful conversations, even when he’s not selling anything.

The upshot is that one month into the second quarter, we’ve almost doubled our TMQL base and are well on course to be where we want to be at the end of June. We’ve also generated new opportunities that would not have emerged had we taken the traditional approach and Ryan shared with me that he’s having fun selling again. By the way, if you'd like to see how we're doing this and the strategies we're implementing, check out the webinar:

There is still time to register for Wednesday's webinar, The 7 Steps to Shortening The Sales...

How to Use Social Media Data to Have Better Sales Conversations

I think it’s safe to say that most sales professionals know that it is imperative to be as prepared...

3 Ways Salespeople Kill Sales at the End of the Month

When I was a salesperson, I loved December. It was the perfect time to close business. While...