The Art of Letting Go: What Every Salesperson Should Do

Editor's Note: The world of business focuses on the success, the learnings, and the growth they've achieved. Yet, no one talks about the failures, the hardship, or the process that led to the success. Today's blog is written by one of our Sales Development Reps (SDRs), Carolyn Nangle. She shares her personal story of being in sales and what it took for her to turn her failure into success. She shares her perspective on growth, working and making her mark. 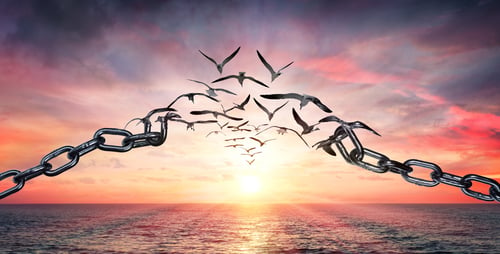 I want to tell you about my best day working at Imagine. My best day at Imagine was the day I almost got fired. It was also the day I was ready to quit. I was so fed up. I was fed up with the work, with my own performance, with my boss, Doug Davidoff. (Some readers may have heard of him.) I was ready to be done at Imagine, and Imagine was ready to be done with me. Doug and I had a heated call that morning, and no one pulled punches. I was told I’d have the night to think things over and we’d meet again at the end of the next day. It was a tense exchange, and didn’t bode well for my future at Imagine. I guess, to give some context, I should back up a little bit.

Before I came to Imagine, I worked in the service industry as a server and a bartender for a decade, so I come from a background of providing exemplary customer service. In that context, the more information you have, the easier it is to provide that high-level service. My favorite bar regular, Roy, used to come in for lunch on weekdays. He had an iced tea, no lemon, and a salad with no tomato. The first time I served Roy, of course, I didn’t know all of this. I simply took the order and brought it out. After a few weekday lunches, however, I realized that Roy was a creature of habit. Soon enough, armed with more information, I was able to have Roy’s tea waiting at the bar when he walked in the door. I was able to give him the best service possible, because I had enough relevant information to do so.

Suffice to say, I came to Imagine with a lot of experience helping people and a lot of experience being really, really nice--even to the jerks. But I had absolutely zero experience selling anything. I never even tried to upsell people on appetizers. This fact didn’t need to handicap my ability to learn and to sell, but it did. I wore my fear like a cloak made of lead. The fear that everyone would see through me, that they would know immediately that I didn’t know what I was talking about weighed on me constantly. I dragged it into every call I made.

I thought the solution was to learn more. Learn about sales, learn about the companies I was selling to, figure out the jargon and familiarize myself with the buzzwords, so that they rolled off my tongue like the toppings on a Red Robin burger. So, I tried to learn. I tried to immerse myself in information. I asked questions. I read blogs. Were they relevant? Maybe. Could they have been helpful? Most likely. But all that happened was that I got more confused. I just couldn’t get past the feeling that I didn’t know enough, and I couldn’t put any of the information I was getting into a relevant context. I would get on the phone and if, to my absolute horror, someone picked up, I would flounder. It was unbelievably frustrating.

Doug told me, over and over, to let go. “People are just people,” he’d say. “Sure,” I’d think, “but these people think I’m an idiot.” Around and around we’d go, like Sisyphus with his rock. I’ll leave it up to interpretation who, in this analogy, is Sisyphus and who is the rock. It was demoralizing. I felt so defeated. At some point, exasperation evolved into anger. My labor was fruitless. No matter how much effort I felt I was putting forth, no progress was being made. This frustration built and festered for a few months, and then came the fateful day I finally gave up.

The night after Doug and I spoke, I prepared myself to work my final day at Imagine. I didn’t know what I was going to do next, but I thought that surely there was something out there I was better suited for. Something I was actually good at. I began the next day like a death row inmate who’d made peace with his fate. I figured I’d get through some calls, to fill the time until my next (and probably final) call with Doug. These calls didn’t matter, because I was done anyway. Que sera sera, as my mother would say.

As I called that day, something truly bizarre happened: I had a great day of calls. I connected with people, and I actually talked to them. We had conversations. We even had meaningful conversations, and I was able to navigate these conversations. A weight had been lifted. I was no longer burdened by my own frustration, my need to do every little thing right. I just picked up the phone and called. Whatever will be, will be.

At the end of the day, I connected with Doug. My plan had been to use the day’s calling efforts as evidence that the job I was doing was pointless, through no fault of my own, of course. As it turned out, however, (and a bit to my chagrin) I’d actually had a pretty impressive day. I think my conversation with Doug that night was the polar opposite of the conversation both of us were expecting to have. Instead, we talked about the fact that I had finally let go. Doug told me that if I could keep this new attitude up, he’d be happy to have me stay. I was excited by my progress that day, and intrigued by the possibility that it could really be that simple: let go.

That day, something shifted in me. I stopped letting all my self-confidence hinge on every dial. I stopped worrying that the person on the other end of the phone thought I was a fraud or a fool. Even if I was sure that they did, I tried to keep them talking. Instead of secretly dreading connect calls, I began to get a rush when a real person would answer the phone. Because it didn’t matter how the call went, or what they thought. All I had to do was get them talking, and I could do that. Have a conversation, and have that first conversation lead to a second conversation. It’s actually a shockingly easy recipe for success. So easy, in fact, that people like me have to make it incredibly complicated.

The challenging part of my role as an SDR isn’t that it’s cold calling. It isn’t the rejection or the monotony. The biggest obstacle I’ve faced has been myself, and how little I thought I knew. The thing is, it’s never been about what I know or what I don’t know. It’s about letting go of the fear of being wrong and looking foolish. I don’t have to do everything exactly right. In fact, if all I’m doing is asking questions and making conversation, there’s really no way to be wrong.

To say there was a learning curve for me would be putting it gently. I will be the first to say that selling does not come naturally to me. In my time at Imagine, I’d like to say I’ve learned a lot, though. And beginning on my best (and very nearly last) day here, the most important thing I’ve learned is this: let it go. There’s a certain art to saying, “Screw it,” and it’s a lot easier to master than you’d think.

The Only Thing Worse Than No Social Media Presence

I don’t spend much time pontificating on social media.  I leave that to people like Gini Dietrich...

The Only Difference That Matters

Why Your B2B Sales Process Is Failing You

This post originally appeared on D2 Demand Solutions blog. I’ve been involved in sales training for...