The Five Levels of Revenue Operations

I have a feeling that five years from now, we’re going to look back and dub 2020 the year of Revenue Operations. Back in January, I paid a visit to my friends at HubSpot to share what we at Lift were doing and our thoughts on this “thing” that was beginning to be called “Revenue Operations.”

I remember in several of the discussions I had, one common question emerged - what’s the difference between revenue operations and sales operations. We spent quite a bit of time digging into that question to determine if there really was a difference or if it was just semantics designed to make it appeal to a broader audience.

At the beginning of this year when I would talk about revenue operations, or more colloquially, RevOps, I’d often get blank faces or silence in response before I’d hear the person I was talking with timidly reply, “What’s RevOps?”

Today that doesn’t happen so often. It seems everywhere I turn someone is talking about revenue operations. As a non-scientific signal of this growth, I am aware of at least 5 different reports on the “state of revenue operations.”

Until recently my answer was always - here’s what it is, YES, emphatically it is different, and here’s how it’s different.

Today I don’t answer the question that way.

Today, my answer is, “It depends.” It depends on the outcomes you’re looking for.

I’ve come to realize that there is no one, right way to do revenue operations.

I also realized that this answer doesn’t provide a lot of help. If revenue operations can be anything, then it doesn’t really mean anything either.

So, here’s my more refined answer:

There are two types of revenue operations organizations. One takes a more tactical view of the role, and the other is more strategic. The right approach for you and the level of performance you should aim for is dependent on the outcomes you desire and the context of your business.

I often hear people refer to RevOps as a game-changer. Realize that if you want to change the game, you’ll need to do things differently - very differently - then you have in the past. This is what a new type of revenue operations, one that we call Strategic RevOps is all about. 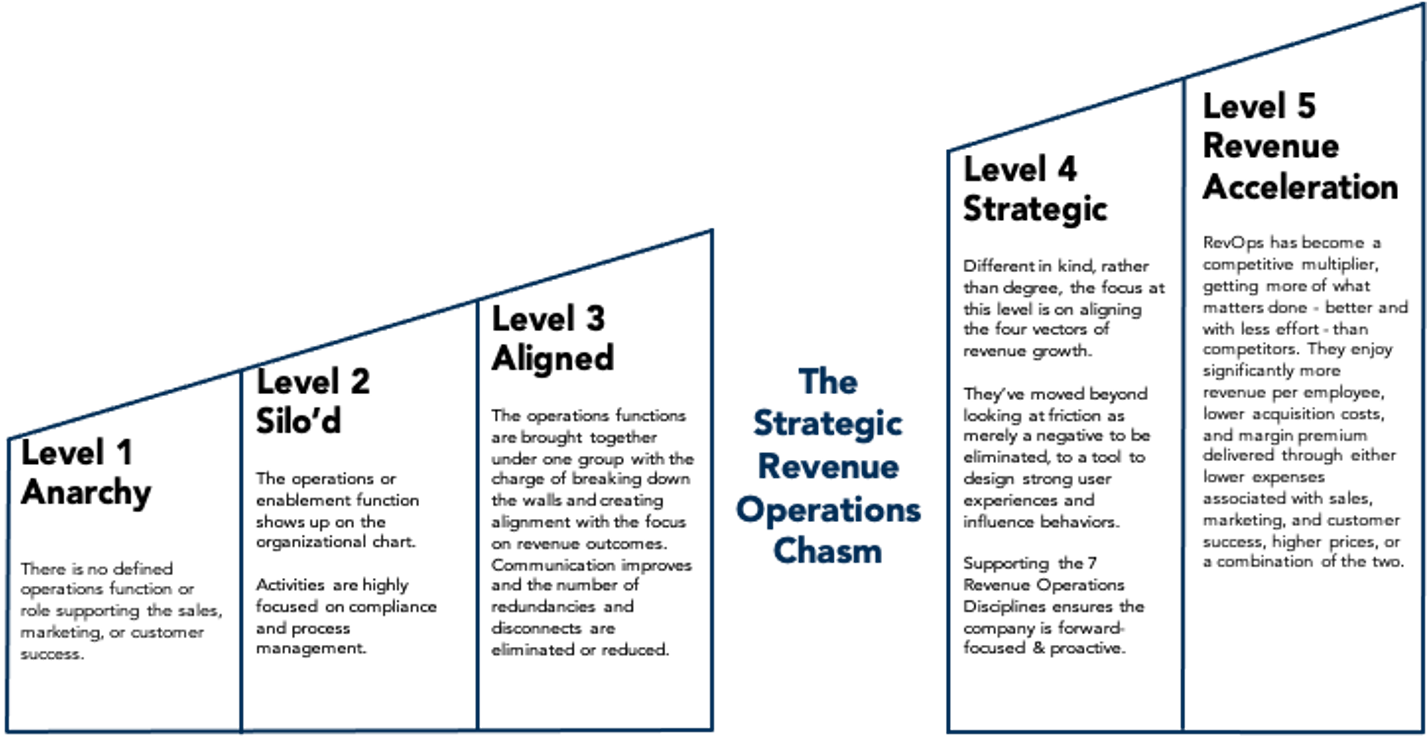 The Five Levels of Revenue Operations

There is no defined operations function or role supporting sales, marketing, or customer success. There can be defined processes, but there are no formal means for monitoring and optimizing processes. The net result is a sort of lone wolf approach where every situation is slightly different and approaches are in constant flux.

While some RevOps activities are getting done, those “jobs” are mixed with other roles and there is little to no proactive attention. Additionally, customer enablement may get some attention, but not enough to make a meaningful difference.

The result of this is a high level of friction that places a significant drag on momentum and velocity.

At this level, the operations and/or enablement function shows up on the organizational chart, often referred to as sales operations or marketing operations. The focus at this stage is improving efficiencies and supporting execution.

Activities are highly focused on compliance and process management. Organizations see improved performance, primarily through the ability to react to disruptions and conflicts that they were unable to address.

Marketing, Sales, and Customer Success have defined lanes designed to align along with a linear model of the customer lifecycle. They’re discrete functions that interact with each other.

This leads to conflict, disruption, redundancies, disconnects, and discord. The net is greater efficiency but not greater alignment.

Sales, Marketing, and/or Success Operations are brought together under one group with the charge of breaking down the walls and creating alignment with the focus on revenue outcomes. Communication improves, and the number of redundancies and disconnects are eliminated or reduced.

The focus is internal, with an emphasis on improving efficiency. At this level, RevOps still has a reactive posture, addressing downstream problems, mostly as they arise. Conflicts and friction-points are addressed, but the organization can easily find itself stuck in a “whack-a-mole” paradigm.

The reason is that the problem-solving mindset is task/transactionally oriented rather than holistic. Addressing one point of friction becomes the cause of a series of additional points of friction. Without a dynamic, holistic philosophy and approach, the RevOps team (and those around them) are unable to effectively manage trade-offs to ensure they’re addressing causes rather than symptoms.

As the organization grows and increases speed, the increased complexity overwhelms RevOps’ capabilities and design. While efficiency increases, vector alignment actually decreases and the result is diminishing returns.

Getting from Level 1 to Level 3 is a relatively straightforward pursuit, and, make no mistake, the companies that make that journey will typically see meaningful benefits from the effort. If the objective is to pick up some efficiencies, clean up some messes, and generate incremental improvements then Level 3 should be enough to get the job done.

Aligned RevOps is not enough to reverse many of the trends like the accelerated growth of costs for acquisition, sales velocity, and the growing friction tax associated with above-average levels of growth (among other things). To make these types of changes, you’ll need to transform from a tactical revenue operations approach to a strategic one.

The challenge for companies looking to drive significant gains, and expand or exploit a strong competitive advantage is that moving from a tactical approach to a strategic one requires a distinctly different mindset. Going from Level 3 to Level 4 is not a simple, linear progression.

In our experience, The Strategic RevOps Chasm is the reason that so many are getting things wrong in their execution. The vast majority of companies and executives that we’ve interviewed are seeking the benefits and outcomes that come with Level 4 & 5, but are still approaching things from a Level 2 or 3 perspective. Strategic RevOps is different in kind, not just degree from legacy ops approaches.

There are 5 distinctions between a tactical approach to revenue operations and a strategic one:

At Level 4, the RevOps team is fully supporting all 7 revenue operations disciplines. As a result, an initial glance of the organization looks extremely efficient. When you dig deeper you realize that efficiency is a byproduct of their efforts, not the objective. The focus is on aligning the critical revenue growth vectors (people, processes, technology, and the market).

As you further focus in, you start to see that they view things very differently than tactically oriented RevOps capabilities. For example, where tactical RevOps views friction as something only to be removed or minimized, strategic RevOps views it as something to be managed.

To illustrate this further, let’s look at one of the key elements I shared in an earlier post on the need for strategic RevOps, the focus on force & friction. Consider what force and friction are:

Both impact behavior - what people do, how they do it, when they do it, and, even, why they do what they do. When viewed through this lens, you can quickly realize that friction is a tool in the tool kit.

The underlying purpose of revenue operations is to strategically coordinate all market-facing, revenue-oriented systems, processes and activities with a focus on increasing velocity, optimizing throughput, and reducing the effort required to solve for the customer and achieve revenue objectives.

The problem most sales and marketing teams have is that they only focus on promoting behaviors, they rarely consider how inhibiting behaviors can lead to better outcomes. Humans naturally follow the path of least resistance. This means it’s often a better choice to increase friction to influence away from non-desired behaviors or where you want someone (a rep, marketer, prospect, customer, etc.) to slow down.

This is just one example of how a Level 4 approach to revenue operations differs from more tactical approaches. They’ve mastered change management, and their strength in the enablement zone keeps them forward-focused and proactive.

This enables the company to reverse many of the trends dragging revenue performance.

RevOps has become a competitive multiplier, getting more of what matters done - better and with less effort - than competitors. They enjoy significantly more revenue per employee, lower acquisition costs, and margin premium delivered through either lower expenses associated with sales, marketing, and customer success, higher prices, or a combination of the two.

My dad would have described a Level 5 RevOps organization as a duck - calm and in control on the surface, but always paddling like hell underneath (quote attributed to Michael Caine).

They look this way because things are relatively calm and in control at the point of execution. The reason for that calmness, or productive efficiency as I like to call it, is because they’re solving those downstream (execution) problems, upstream - before they become problems.

Their focus is firmly based in the enablement and transformation zones (watch this video for more on that).

Here’s the great thing about investing in RevOps today - the impact of the investment is amazing.

There’s no question that the performance of a Level 4-5 company is significantly better than a company at Level 2-3, but the difference is what’s being done is relatively mild. The real difference between the two organizations is how they approach what needs to be done, and the mindset they bring to those activities.

As you may have noticed, the past couple of years have been a wild ride for businesses and, if...

InsightSquared Review: Our Choice For An Efficient RevOps Platform

“Revenue Operations” or “RevOps”. If you haven’t seen or heard the phrase by now...Well, then this...

It’s an end-of-year tradition for newspapers and magazines to do a “Best Of” roundup so as the year...